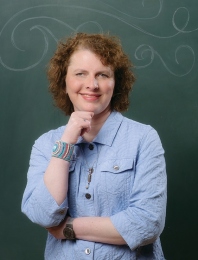 Kathy Nimmer is the 2015 Indiana Teacher of the Year and a finalist for 2015 National Teacher of the Year. Recently, she received the Dollywood Foundation’s 2016 Chasing Rainbows award, the NFB’s Blind Educator of the Year Award, and the Hasbrook Award, a lifetime achievement honor sponsored by Bosma Industries. Among other previous honors, she was named Sagamore of the Wabash in 2014, the highest civilian honor in Indiana. Kathy also loves writing, maintaining a blog on the Huffington Post. Through a Lilly Teacher Fellowship, Kathy wrote and published an anthology called Two Plus Four Equals One: Celebrating the Partnership of People with Disabilities and Their Assistance Dogs (2010). This followed a book of poetry called Minutes in the Dark, Eternity in the Light (2006). Kathy Nimmer currently teaches writing at Harrison High School in West Lafayette and serves as Tippecanoe School Corporation’s coach and mentor for new teachers across the district. She is also a frequent motivational speaker at local, state, and national events. Kathy earned her BA in English Education from Trinity Christian College in 1991 and her MA from Purdue University in 1992. Her life is grounded in faith, family, friendship, and creativity.

What has happened in your life that has made you feel unworthy, broken, or unable to make a difference in this world?

How has brokenness ever unexpectedly made you particularly qualified to serve in this broken world?