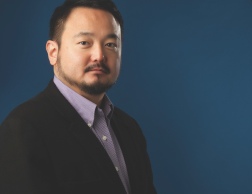 Rev. Dr. Soong-Chan Rah is Milton B. Engebretson Professor of Church Growth and Evangelism at North Park Theological Seminary in Chicago, IL and the author of Prophetic Lament (A Commentary on the book of Lamentations from IVP Books, 2015); The Next Evangelicalism (IVP Books, 2009); Many Colors (Moody, 2010); and co-author of Return to Justice (Brazos, 2016), and Forgive Us (Zondervan, 2014).

Rah is formerly the founding Senior Pastor of the Cambridge Community Fellowship Church (CCFC), a multi-ethnic, urban ministry-focused church committed to living out the values of racial reconciliation and social justice in the urban context. He previously served as an InterVarsity staff worker at MIT.

Soong-Chan, his wife, Sue, who teaches special education, and their two children, Annah and Elijah live in Chicago.

Who are the people who you aren’t bringing to your “ark?”

How are the ways we’ve run away and hidden from the changes that have happened in this world?

How does this change start with Lament?